Daylighting design can be challenging, but we’re here to help. Below you’ll find some tips on where to use specific glazing materials, the best way to configure a system for your needs, some information on loads and codes, and more. As always, our team is available to guide you through the process, so if you have questions or need some advice on which system might be best for your project, email sales@majorskylights.com or call 888-759-2678.

How Much Daylight Does a Space Need? 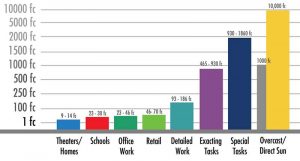 The sun is a powerful force. Take a look at the chart to see just how many footcandles the sun produces compared to what’s needed in a typical office space. Outdoor light levels in full sunlight are approximately 10,000 foot-candles (fc), while overcast days are around 1000 fc – but many general office areas need less than 50 fc. For areas/tasks requiring 45-90 fc, and close-up and precision tasks requiring 140-186 fc, additional task and/or overhead lighting is often required.

We’re often asked if translucent panel systems restrict light, and some configurations with high densities of insulation provide light transmission that’s less than 10%, but keep in mind that even that percentage of light on a 1000 fc day would allow 100 fc to come into a space.

How Do I Determine the Right Levels? 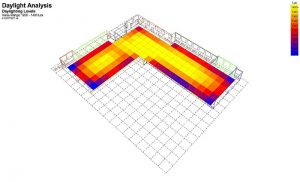 Daylighting analysis is the best way to get an idea of how light will behave in a space, and where the daylighting system design can be tweaked for best results. Major can provide daylighting analysis if needed, allowing you to see exactly how a translucent panel system will impact interior spaces. Contact our sales team for more information at sales@majorskylights.com , or call 888-759-2678.

What Should I look for in Performance Numbers? 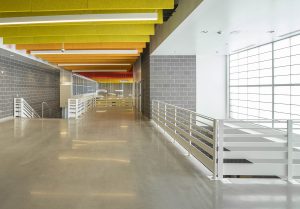 This measures the amount of light that travels through a glazing material without being reflected, absorbed, or scattered. The higher the number, the more light is coming through the glazing material. Glass systems tend to have the highest levels of light transmission, followed by polycarbonate multi-wall and translucent panel systems. The percentage can vary depending upon the color of the glazing material, insulation options and various glass films and coatings, so be sure to review manufacturer data to find out values for specific configurations.


U-FACTOR
U-factor is the rate at which a window or skylight conducts non-solar heat flow – it’s a measure of thermal transmittance through conduction, convection, and radiation. Conduction is a process by which heat is directly transmitted through a substance when there’s a difference of temperature between adjoining regions, without movement of the material. Convection is the transfer of heat through the movement of material. And radiation is the transfer of heat through space without relying on an intervening medium. U-factors can be determined for the glazing material only or for the entire system. In terms of values, the lower the U-factor, the higher the thermal performance. And while U-factors and R-values are different (U-factors measure glazing performance, R-values measure insulation performance), you can calculate one from the other – U = 1/R (R-10 is the same as U = 0.10). 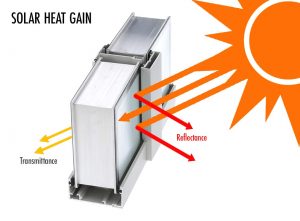 The SHGC is the fraction of incident solar radiation admitted through a window, both directly transmitted and absorbed and subsequently released inward. It’s generally shown as a number between 0 and 1, and, like U-factors, the lower the number the better (the lower the number the less solar heat it transmits). While lower SHGC numbers are generally better, it’s important to note that in some parts of the country solar heat gain can be a good thing. In winter months, buildings in northern states can sometimes benefit from the additional heat the sun provides, though it’s a balancing act as summer sun can also cause issues. SHGC numbers vary by configuration, and factors like glazing color, insulation and coatings/films can all have an effect on performance.

Below is a chart with some common glazing materials and general performance numbers. Please note that these numbers are for comparison purposes only and may vary with product updates, etc. 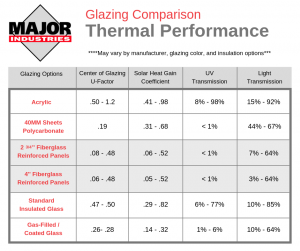 Links to helpful tools and calculators 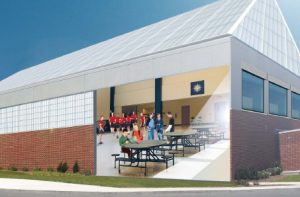 Which is better? It all depends on your space! Wall systems can be a cost-effective and simple way to bring light into a space, and allow some ventilation and view options, but keep in mind that light from exterior walls generally only tend to penetrate into a space about 30 feet, leaving deeper interior spaces without access. Skylights are extremely effective at bringing light into areas, but they can be more costly due to structural requirements and make issues like light control even more challenging.

Building orientation plays a big role in which type of configurations works most effectively, with east-west oriented buildings being able to make the most of natural light, but keep in mind that translucent systems can be great for controlling south-facing exposures and north-facing glass skylights and walls can bring indirect light into a space without the worry of hot-spots and discomfort from the sun’s direct rays. Also keep in mind that Major has a wide range of mixed glazed configurations to assist with your daylighting design challenges. From skylights with north-facing glass and south-facing translucent panels to wall systems with integrated operable windows, we will work with you to find the right solution.

When do I Need to Specify Thermal Breaks? 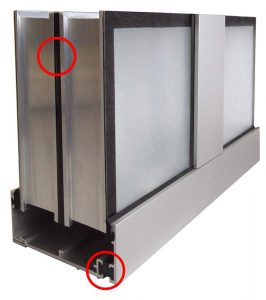 The 1970s marked the beginning of the high performance, chemically manufactured and engineered thermal breaks that we see today. Standard to the storefront, window, skylight and curtainwall industry is the poured and debridged polyurethane thermal break. This material provides significant structural strength in shear, compression and tension, as well as integrity and resilience. Because of this strength, the integrity of the aluminum frame is not compromised and longer spans are possible. The polyurethane also has very low conductivity, allowing it to bridge the gap between the interior and exterior aluminum components of a frame. Other new materials, like thermal struts (used in our Auburn® single slope skylights) also provide an effective thermal break between interior and exterior surfaces.

We tend to think of thermal breaks as a necessity for cold climates as they help in “de-bridging” aluminum, which is a great thermal conductor, to help keep interior surfaces warm and prevent them from frosting up. But thermal breaks can be useful in warmer climates as well, where intense afternoon sun can increase the temperature of the aluminum to uncomfortable levels. By “breaking” the thermal bridge, interior surfaces stay closer to room temperature.

Thermal breaks also increase the overall U-factor performance of a daylighting system – something to think about when considering long-term energy savings.

Because specific building codes vary greatly by area (both regionally, state-to-state, and county-to-county in many instances!), we’d encourage you to contact the Major Industries team directly with specifics about your project. Visit our Architectural Consulting page and complete the form to tell us a little more about what you’re working on and the design challenges you’re facing. 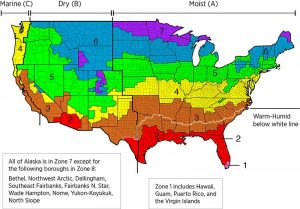 That said, it’s important to keep an eye on energy codes when working with daylighting systems, as different regions have different performance standards. The map at right shows the climate zones for the US, and below is a chart from the 2018 IECC showing minimum performance requirements. (Note that not all areas of the country have adopted the 2018 standards.)

Below are some links to national building codes and related information:

Which Glazing Material Options Do Your Offer? 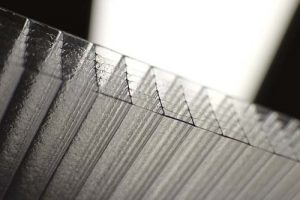 Major offers a wide range of glazing options – from glass to polycarbonate multi-wall (shown at right) to translucent panel systems and mixed glazed designs that combine materials. Different glazing materials can be effective in different spaces, depending on their use. For an entrance or atrium where views to the exterior or a dramatic view of the sky is required, a glass wall or skylight system works well, while in other areas of the building where people will be working on computer screens or spending extended amounts of time, a translucent panel or polycarbonate multi-wall system that blocks direct sunlight will be more beneficial. In some instances, mixed glazed system – one that incorporates multiple glazing materials – might be better than a single glazing solution, in that it can provide views and light control.

Check out our product pages for additional information on each of our lines, or request more detailed information by contacting our sales team directly at sales@majorskylights.com or 888-759-2678.

How Do Translucent Panel Systems Differ from Other Glazing Materials? 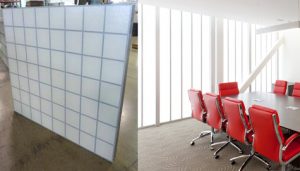 Because of the sandwich panel design, they can also be filled with insulation for enhanced thermal performance over traditional glass, making them perfect for use in extreme climates – whether you need control of excessive solar heat gain or are looking to keep the cold temps out.

Translucent panel systems also extremely versatile. Numerous configurations are available, from specialty systems that fit into existing curtainwall framing to blast and hurricane protection systems to pre-assembled and unitized options that allow for a mix of materials from translucent to glass to louvers and metal panels.

For more information on the benefits of translucent panel systems, click here.

Why Daylighting is Good for Occupants and the Environment

Daylighting can improve mood, increase sales in retail environments, and boost student test scores. See what daylighting can bring to your next project.

How Translucent Panel Systems Can Benefit Your Next Project

From light control to design versatility, see why translucent panel systems from Major might be the right fit for your next project.

Get Inspired With Our Project Gallery

From simple wall system designs to complex custom skylights, Major has worked on a wide variety of daylighting projects throughout the US and around the world.